Trying to finish something

On this glorious afternoon, I am trying to finish something. I haven't used my weaved tea towel yet because they are "tied" or "embroidered" as some people say.

It's not exactly embroidery as it consist of a series of knots but this is what I am working on.

The ideal way of starting or finishing off a project it's while it is still attached to the loom. I didn't do it then and I was told that "you can't do the embroidery finish after the project is cut off the loom". To me, that  sounded like a dare ... and I am up to it.

So, this afternoon, I taped the towel to the glass of the patio table and 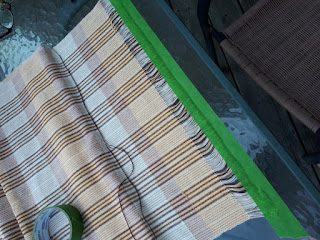 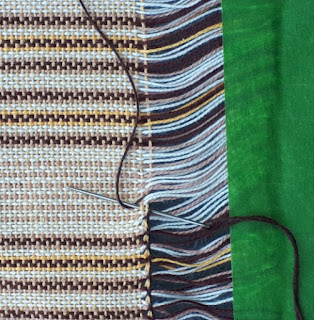 Ok, it is a little bit easier on the loom, but this is working better than I thought it would. Kind of hard to see here do the color of the thread. I'll snap more pictures when I get to work with a  better color than chocolate.

Joining Kathy for Slow Sunday Stitching. Come and visit us.

Email ThisBlogThis!Share to TwitterShare to FacebookShare to Pinterest
Labels: Something Other than Quilts, Weaving, Whatever Wednesday

Boy! It has been awhile since I was here. I think I fell off the face of Blogland but I am back. It's the last Blue Saturday of the year and I haven't done any. So, this morning I tried to get my sewing mojo going by taking care of the 365 Challenge quilt. 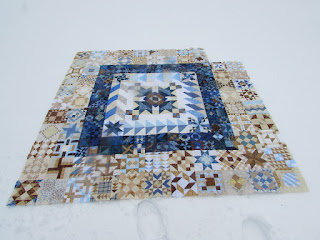 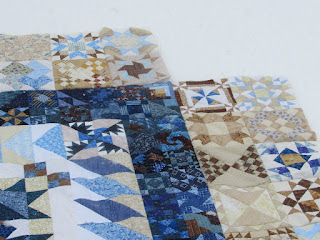 That was when I couldn't finish the corner because I was missing one block. Last week I hunted down the missing block. Apparently, it wasn't missing. It has never been made as only 71 blocks were and not 72. But on the 3rd of July, there's the pattern for the Temple Court block. 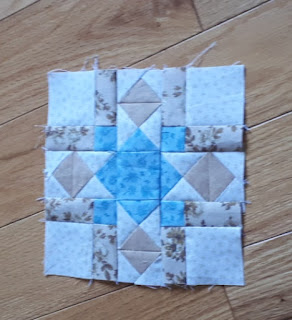 So I made one this morning and ... oops, it's sideways. Anywho! I was able to finish the corner. 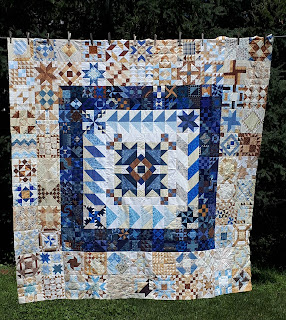 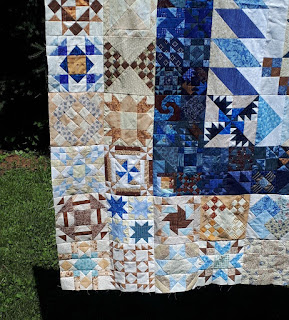 So there's my blue story for July. I still have a lot of yellow blocks for June and now July too needs more blocks made. Cheese!! Anyone out there has a day or two too many that I could buy off? Anyone?  Really! No one? Darn!

Until next time .... yes, yes, eventually I will show you why I am not spending a lot of time in my sewing room, beside the garden. It does involve this 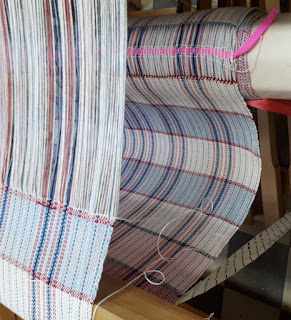 and a new toy!

Email ThisBlogThis!Share to TwitterShare to FacebookShare to Pinterest
Labels: 365 Sampler Challenge, Blue Quilts, Something Other than Quilts, Weaving, Whatever Wednesday

I haven't been sewing much this past week, but I have been slow stitching during my lunch breaks at work. :^D

Since I can't bring the old quilt at work to work on, I brought something much more portable. My MIL table runner. Yep, finally working on this one. I kind of resurrected this one and started working on the appliques. 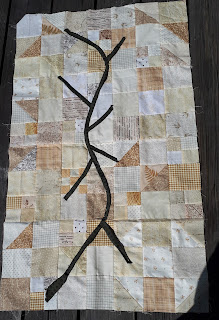 Sorry if the pictures aren't the best, they were taken with my phone.  Click to enlarge. 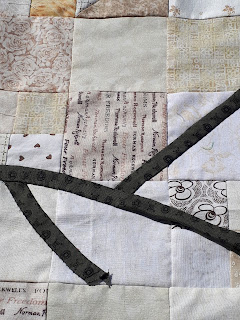 I started in the middle of the vine and I'm slowly working my way to the edge. I will pull some fabric out to be used for prepping of the leaves ... hopefully this afternoon.

Don't know if this count as slow stitching .... 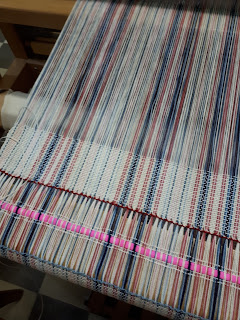 but I have been working on some more towels. It uses a very big "needle" to shuttle the thread from one side to the other, hehehe! Don't mind the hot pink piece of rag in there. It is where the piece will be cut, to separate my work from the previous lady's work. The red row you see is my edging. It's the first time I do it this way. It's a little bit like embroidery. It finishes the towel so nicely. My stitches are not very even yet. You can see her beautiful blue edging at the bottom of the picture. I'll show you more of mine next time.

Joining Kathy for Slow Sunday Stitching where there's lots of wonderful project made by hand to be seen.

Since this is my first try at repairing an old quilt, progress is slow but it's progressing nevertheless. 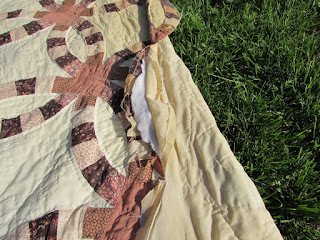 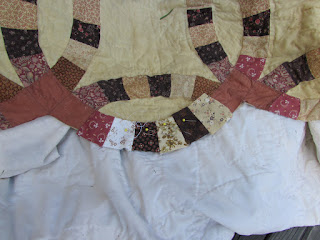 I have figured out that if I sew all the components together before, it is easier to applique after. I am learning, I am learning ... slowly but surely.  :^D

(If you want to see the beginning of this adventure, see this post.)


Teaming up with Kathy for Slow Sunday Stitching. Come and see us.