What Am I Not Doing?

Back in October, the plan was to add a light green (more like lime) Scrap Jar Star to the group. 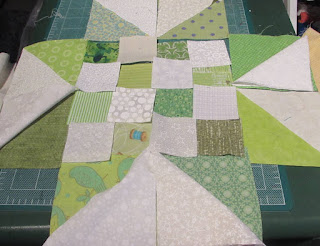 Well, it's not done but it is cut. That counts for something right?
I cut more scraps to kit another project. Don't know the name (I call it Quarter Star for now) but I'm in love with it. 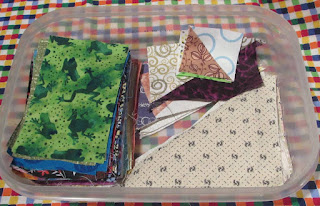 I believe I have enough for a large quilt or maybe even two small quilts in here ... and I'm not done. I haven't looked into the red scrap basket or the orange one yet. 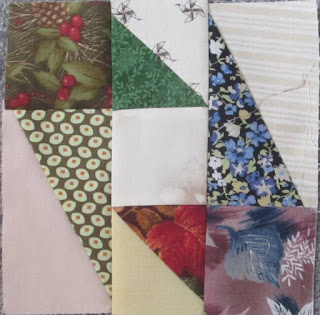 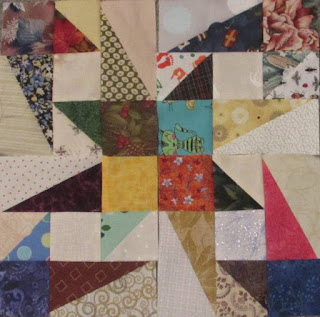 I blame Sarah at Confessions of a Fabric Addict (scroll down a little) for my sudden obsession. Hahaha! I had to look at some videos on how to cut the Half Rectangles Triangles unit. You have to know the trick of the trade to do this one. Funny unit but I'm hooked. I'm even thinking of making one with flannel.
This search for scraps for the Quarter Star prompted me to declutter the sewing room a bit.
This is what's at the bottom of the design wall. :^(  Shame. 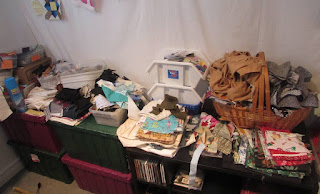 After a few days, there was an improvement. 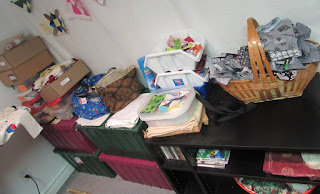 I still have to deal with the two white plastic tubs and the basket holding all the grey fabrics. The projects are in their own boxes or containers and are labeled (far left). I even have a box named "Mini Vibes". It holds projects that are almost done and that just need a little bit more love to be finished, like sewing the binding on mug rugs and stuff like that.
I did sew the label onto Field of Poppies (Good Fortune). There are still lots of thread ends to be dealt with but other than that it is done! 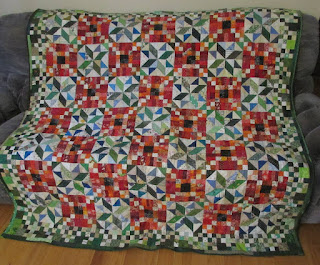 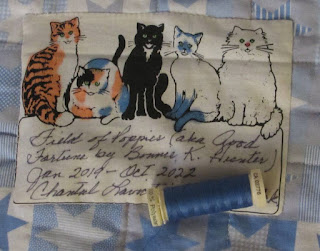 I haven't jumped on the wagon of Chilhowie that Bonnie is so generously giving as a Mystery Quilt because I am not sewing. I am keeping all the directions though. I'll see in January if I need a Chilhowie or not.
So, what's the reason I am not sewing? First reason: I finished Field of Poppies! I need to baste another quilt to quilt but I don't know which one. I'm stuck! Next week, I have two days off. Hopefully, I'll get my act together and get something done.
Second reason: I am training two new employees, yes, two at the same time. It's draining my energy but at the same time, it is a relief because they'll be doing my job. We were three Team Assistants doing the work of five. Soon (hopefully), there will be five of us again. Yay! They are fast learners and they are doing very well so far. To train them, I have to work from the head office, which is a 45-minute drive one way. When I get home, I'm brain-dead but happy. All this has been accompanied by an increase in my salary ... but a decrease in my sewing time and energy. Oh well, it's temporary. :^)
This is not much blog-post-worthy but I wanted to come in and say hi.
Hope you all have a great week.
See ya!
;^)
Joining
Angela at So Scrappy
Frédérique at Patchwork and Quilts
Cynthia for Oh Scrap
and
Sarah for Can I Get a Whoop Whoop?

It's good news on the job front that extra staff have been hired. Lots of work for you now, but hopefully some relief for you soon.
And I know you'll find your quilt mojo soon. You can't keep a creative quilter down for long. Also thanks for working out the star block that Sarah showed last week. I hadn't figured it out, although I hadn't tried real hard either. It's intriguing.
Pat

It's always good to hear from you even if it's not too much sewing done.... great to hear you will have extra help at work soon, and having some extra pay coming in... the sewing will wait for you. As usual I am amazed at what you put together with your smaller pieces... those stars are lovely...
Hugz

Wow, that Quarter Star is a neat one! Lots of good scrapping. I think it does count that you cut out the pieces for a lime green Scrap Jar star, too. Every little bit counts! Good luck with your training at work - it will pay off eventually!

I love that star block! something about that long skinny point. Sorry you are not able to sew right now but I'm sure the extra money is nice - sounds like it will be better for you in a couple weeks.

Gee, I thought that was a fine post, enjoy seeing what you're up to. Sometimes you just need time to recharge, and cutting often gives me time to collect my quilt thoughts. Your scrappy star looks like one of those blocks that, when you get a bunch sewn together, you can't easily tell where the block is. Love those quilts. Big accomplishment to get Field of Poppies all done--it's beautiful! Hopefully you'll get a breather in the action at work before too long.

Well I am glad that you popped in and getting those two new employees trained up is certainly a good thing. Love that unusual star. Well we all come to halt every now and again, I am sure you will be up and running again soon. xx

Congrats on finishing Field of Poppies, it is wonderful. I love your cat label, too--did you draw those adorable cats? Thanks for the link to Sarah's star quilt, it's an awesome design. And yes, cutting things out does count! Good luck at work, I had a similar commute for years. It was tough at times, especially in bad weather.

Sorry to read that you've had a sewing slump -- but it looks as though the muse may be knocking at your door. The quarter star block is so intriguing, and the results will be great esp. if you make all the quarters without trying to match/coordinate any sections. I had hesitation about bias rectangles until I got the Split Rects ruler by Deb Tucker/Studio 180. It makes 'em easy.
Your version of Good Fortune is lovely. I'm sitting out Chilhowie but I'm saving the weekly clues.

Your scrappy stars remind me of something that Bonnie Hunter has done. Looking good!

There are times in our lives when we need to slow down and give ourselves time to breathe and refresh. Life in this society is so high pressure, to do more, move faster, etc., at the expense of preserving our very souls. You are maintaining a household while working full-time and I'm amazed that you accomplish so much in your quilting life as well.

Sometimes, a girl just needs a break. I hope things continue looking up for you, especially at work. I've been meaning to try my hand at the Half-Rectangle-Triangles, too. January for sure!

(I know it is now Pink month but this was to be posted two weeks ago.) Lots of projects to choose from but I'm stuck on this one. Irish ... 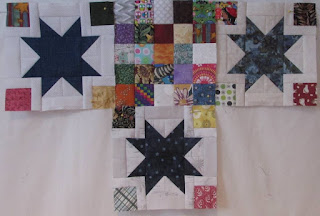